The view from our hotel window when we woke up on Tuesday morning.  A little grey and overcast maybe, but the distant towers and spires held promise for the day ahead.

Back tracking slightly; there were two worries in my head prior to flying off to Amsterdam (apart from the Pore Ole Leg that is).

My Dear Friend was past her due date for delivering the baby boy who would make her family complete.  Very obligingly she went into labour and delivered him just before lunch on the Monday we were due to fly out. He is ACE.

Phew! with Mother and Baby safe and well, and the promise of photographs soon, that was one worry out the way.

My Bezzie Mate had been called Southwards to do the waggle magic at which he excels.  He needed accommodation for the week we were away and issues with availability and price were causing him to threaten to sleep in his car.

Taking advantage of the fact that he was staying with us for the weekend and couldn’t escape my assertiveness, I found and booked a very nice apartment in Henley-on-Thames for the week.  It was cheaper than staying in a hotel, was in a very civilised area and the owner seemed like a nice bloke.

BM was driving down whilst we were in transit and it was good to receive, as I lay on my hotel bed nursing my bruised and battered knees, a text from him and from the apartment owner (the apartment was in the grounds of his house) confirming that BM had arrived and was settled in.

Uni Boy was safe (if rather sunburnt) in York.

Gap Boy and the Scoobs were minding each other at home. My money was on Scoobs for being the responsible one.

All was well in the world – apart from the POL. Hey, who wants to sleep for more than two and a half hours at a time anyway?

After admiring the view from our window, Hub and I descended for breakfast, which was held in the restaurant on the ground floor – a wonderful place for people watching as the hotel was bang in the middle of Old Amsterdam and adjacent to dozens of shops – yes, yes – and seed cafes.

We went for a quiet stroll after breakfast; to get our bearings and generally suss out the environment.  One of the leaflets we picked up in the hotel foyer was advertising a number of different canal cruises. This was one thing we were both decided on – the canal cruise was a must.  Deep joy to discover that they did a two and a half hour cruise during the evening which included a three course meal cooked on the boat.

It wasn’t far to the booking office and after we had parted with our euros, we decided to find the Koffiehuis recommended by last night’s angel.

Rest assured, my progress across roads and tram lines was more than tentative but Hub’s arm and his reassuring smile got me safely to our destination.

Smits Koffiehuis was just as our angel described it.  The weather was still a little overcast but we opted for outdoors and the marvellous view of canal life.

As we walked/hobbled down the stairs to the restaurant, the first smell was of freshly squeezed orange juice – a certain way to Hub’s heart.

A charming waitress with impeccable English showed us to an outside table and brought menus.

Hub had slightly overdosed on scrambled egg at breakfast so he could only find room for a pudding.  I opted for something described as ‘Amsterdam Lunch’.  This seemed to please our waiter tremendously when he took the order.

I may have mistaken his pleasure for a ‘gullible-tourist snigger’ however.

Hub’s date and almond tarte with ice cream arrived and was pronounced excellent.

My ‘Amsterdam Lunch’ was less successful but I ate it bravely.

Apparently it is custom to eat a white roll (I am a brown bread woman) spread with margarine – or equivalent ( I am a butter-only woman) for one’s lunch.  On one half of the roll sits a limp slice of processed cheese (not Gouda or Edam but mild Cheddar) and on the other a steaming ham and cheese croquette.  Accompanied by some very nice potato salad and some not so nice coleslaw.  This was my Amsterdam Lunch.

I didn’t see anyone else eating one although it was lunchtime and we were in Amsterdam.

We walked/hobbled lunch off and got caught in a rain shower. Diving up a side street we found the most glorious cheese shop.

Half an hour later, courtesy of Henri  Willig, we came away with an impressive wheel of Gouda, some goat and cow cheese and chilli liquorice (shouldn’t work but does). The lady who served us was a mine of cheesy information and samples.  We could have stayed there longer and spent even more money but we only had cabin luggage and not much room for smelly cheeses.

Next door to the cheese shop was a restaurant displaying an eye-watering array of waffles – and as I had been strongly advised to try one dipped in Belgian chocolate by my literary and very knowledgeable cousin, we bought some. 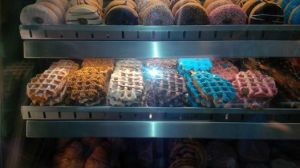 Exhausted by our exertions, we staggered back to the hotel and flopped – well I flopped.  Hub went back out and found a cash point. He also found a huge open square  – ideal for people watching – that we scheduled for the next day.

I tried out the shower – which nearly became a wet room because I forgot to tuck the curtain inside the bath – oops – much mopping and soggy towels.

I do like a hotel that supplies complimentary toiletries – it encourages cleanliness (not necessarily godliness) because the hotel exhorts you to use them and their replacements.  I usually take the unopened ones home – well it would be rude not to – and have an array of different freebies in the upstairs bathroom.

Not any more – or at least not when travelling abroad.

My tiny 20cm by 20cm resealable plastic bag was packed full of my life’s essentials already, and Hub had been persuaded to put toothpaste and underarm in his.  Would it be worth arousing the wrath of a nice Dutch security guard by taking extra liquids just to enhance my bathroom collection?

Nope.  Although I pinched the soap.

It occurs to me that the restrictions on liquids must therefore be saving hotels rather a lot of money on complimentary toiletries.

Clean and refreshed, we ambled/hobbled down to the canal again and waited with our fellow diners for the canal boat to be ready.  We stood next to three lovely Irish ladies – two of whom were affable and friendly, and one of whom kept nipping off for a fag and a scowl.

The Captain beckoned to me and my walking stick, helping us very gently and courteously on board.  Hub and I sat opposite each other by a window, and we were joined by a young American couple. He was the strong and silent type.  She was assertive (read ‘Bossy’) and chatty – to him – not us.  A sly glance at her hand revealed an engagement ring and my nosy radar gained the opinion that this was their first trip abroad together.  Aaaah.

The food was gorgeous – no sign of anything processed, refined or packaged.

An amuse-bouche of meat wrapped in a teeny tiny tortilla, bottles of water already on the tables and a glass of Prosecco (which they kept topping up).

Warm brown bread and a choice of butter or dipping oil.

All cooked on board and all accompanied by free wine and beer. Oh, and coffee.

The cruise was brilliant.  It took in all the major landmarks of the watery side of the city; the houseboats and the raft dwellings, a constant procession of happy locals lazily moving their crafts out of each other’s way as they drank wine and talked and smiled and waved. Dutch people are so nice.

We stopped temporarily and I overheard one of the waitresses saying that a lady had to get off because she felt unwell. It couldn’t have been motion sickness – it was a very smooth ride.

The American couple had moved onto smiling and nodding at us by the time we arrived back at base. We climbed very slowly back up to street level; POL was complaining rather bitterly about having been sitting on a hard chair for two and a half hours.

Whilst we were standing, waiting for the blood flow to return to the POL, and admiring the scenery, two of the lovely Irish ladies came over to us.

They were now very jolly Irish ladies, and mid giggles, confided that they were best friends who had known each other for years. Their companion was the sister of one of them and the unscheduled stop on the cruise had to be made because they had a huge falling out with her and she voted with her feet.  Needless to say, they drank her wine as well as their own and were off in pursuit of nightlife after bidding us farewell.

It was late but not too late, and in keeping with the holiday spirit we indulged in a few drinks at the hotel bar. Another angel in the guise of a barmaid decided that it was still happy hour and doubled our drinks (I was on Diet Coke because of all the painkillers but Hub tucked into Amaretto with gusto).

Up to our room where the huge and knobbly purple pillows had been replaced by more traditional white ones.