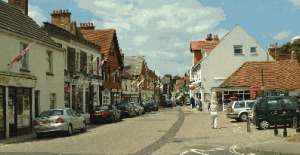 It was a funny little place; lacking the charm of the nearby yachting village or the charismas of the larger and well-know yachting town upstream. As teenagers involved in the sailing scene, we were dismissive of the place. It was ‘touristy’; shops decked out with brightly coloured buckets and spades, inflatable rings and airbeds, rock with a generic county name through the inside and boxes of fudge and toffee bearing pictures of grazing ponies.

It was a place for passing through and rarely stopping. A place inhabited by holidaying grockles and nouveau riche who had bought their holiday homes without realising that the town was quite a way from the sea. Our village, the village where we stayed in the summer, sailed out to the castle and camped in the boat park. Apart from the yacht clubs and the pub, there was nowhere else to spend your money and any other entertainment or supplies good be acquired in the big town – without having to pay over-inflated tourist prices.

I remember one summer in particular. I still have the photographs of us all lounging outside OUR yacht club – there was great rivalry between the two clubs. Hair stiff and bleached from hours sailing, half-worn wet suits (it was easier to leave the bottom half on and wriggle out of the top).  Clutching half pints of rough cider and feasting on freshly made crab sandwiches. Nothing else really mattered that summer.

One of our group had very rich parents who owned a holiday cottage across the road from the pub. We took it in turns to sleep there or in hastily erected two man tents in the boat park once the clubs were closed. We knew that we weren’t supposed to be there but provided the tent was packed away before the morning sailing started, the older members of the club turned a blind eye.

Not that it was peaceful sleeping in the boat park; people ignored the sign ‘Frap your halyards’, and a s a consequence the night was punctuated with the sound of unfrapped halyards tinkling against masts. Hedgehogs and foxes rustled their way round the boats, looking for dropped sandwich crusts and half-empty crisp packets. The sun disturbed our fretful dozing and spurred us on to collapse the tent and stagger across the road to the cottage for coffee and toast.

The summer came to an end – as it always does  – and we departed to our various courses and jobs. That summer could never be repeated anyway. In moving on, we jolly sailors lost touch with each other and other entertainments replaced the joys of sailing.

The village never lost its charm for me; enhanced by discovering that one of my favourite authors had written a trilogy of books loosely based on family life in Little Village and Big Village, with the Island across the sea playing an integral part. I made subsequent visits; with friends, with groups of children I was responsible for, and ultimately with my own husband and family. It became a place of pilgrimage; somewhere to go and lose the troubles or celebrate happiness. There was a stark contrast between the still quiet waters around the harbour and the crashing waves out on the
Spit. Waves that were so ferocious that year in and out, new methods of prevention had to be found to prevent the sea encroaching on the houses nearby.

I found out very early in our relationship that my husband had also sailed from the village – though at a different time from me – and that he loved it as much as I did. 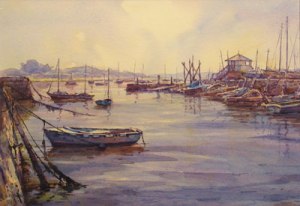 Winding the time clock on, our children became adults and needed less entertaining on holidays, so when the opportunity arose to spend two summer weeks in a cottage in ‘my’ village, we jumped at it. Part of me was worried that the village would have changed, that it would no longer be the magical place I remembered – that we both remembered.

It was like stepping back into a time capsule. The pub was still there – although it had added an extra wing and a conservatory – but the cider was just as good and the sandwiches – made from freshly caught crab – was wonderful. We could see the boat park from our bedroom window; people were still neglecting to frap their halyards, and although we didn’t have the credentials to venture into either of the yacht clubs, we didn’t need to sleep in tents either. I had my favourite author’s books on my Kindle and delighted in spotting thinly disguised landmarks as we walked the dog along the harbour side and around the various beaches.

It was a wonderful fortnight. We caught up with family and friends; the tiny backyard was the ideal venue for a family get together in the sunshine. The dog loved his seaside walks and I achieved a lifelong wish. I had sailed out to the castle on many an occasion – and  came back the same way, but I had never walked the mile and a half along the shingle bank, nor taken a ride on the little ferry boat that tied up at the harbour wall.

The strangest revelation of our holiday was the exploration of Big Village.

It wasn’t full of grockles and holiday shops anymore. Charity shops rubbed shoulders with a wine bar and a delicatessen. The Co-op was stocked with normal food and there was no sign of sticks of rock or boxes of fudge. At the suggestion of friends, we ventured further to the beaches further away from Little Village, and found some beautiful examples of Art Deco architecture along the sea view.

On our last day we met up with our lovely friends for a long and leisurely brunch in the sunshine at a cafe on the beach. A very happy start to the process of packing everything back into the car and heading North for home.

It was good to go back to Little Village and find it just as beautiful and enchanting as I had found it before. Better to still was to roam around Big Village and find that it wasn’t such a strange small town after all. 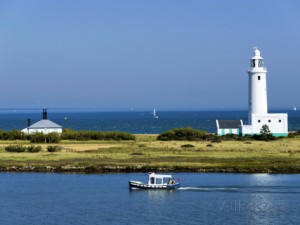