The scene in the photograph is idyllic; a long garden with flowered borders and a neatly mown lawn. At the end of the lawn is a large tree and under it, a group of children cluster around a young girl. I am one of those children and looking back up the garden to the house, I can remember seeing all the grown-ups looking out at us with glasses of champagne in their hands.

The house belonged to my grandparents. The celebration was for the twelfth birthday of my cousin Caroline, it is she that is sitting like a queen in our midst. She is chubby for her age and the pink be-frilled party dress that my aunt has dressed her in makes her look like one of those crinoline ladies that people put over their toilet rolls.

She is an only child and spoiled rotten. We are a large family. Our grandparents had seven children and nineteen grandchildren ranging in ages from my cousin Andrew aged fourteen, down to our newest cousin Rachel. She is only a few months old and is back in the house with the grown-ups and half a dozen other under-twos who can’t be let loose in the garden.

One of my aunts emigrated to New Zealand; she and her husband don’t think that Caroline’s birthday party merits uprooting their four children in order to make a long and very expensive journey to England. They are off the Christmas and Birthday card list as far as my grandparents are concerned.

We’ve only had a twenty minute drive to get here and I didn’t think it was worth it either. It was my birthday a month ago and my grandparents didn’t even turn up at our house on the day; they were busy doing something or other with Caroline.

Caroline’s father jumped ship when she was three years old. His wife, my Aunty Suzy, had spent every last penny he earned on Caroline and herself. He had grown exhausted by Suzy’s excesses and, finding a sympathetic ear, went off with his secretary. Suzy and Caroline came to live with our grandparents and the rest of the family were knocked back into insignificance almost immediately

My Uncle Charlie fell out with Suzy some years ago, so he, his wife and their two children are absent as well. Like all his other brothers and sisters, Charlie felt that Suzy and Caroline were running through the family inheritance as fast as they could but he was the only one to stand up to her. Suzy is the apple of her parents’ eyes; she could do no wrong and Caroline has inherited all of her most toxic traits.

My grandparents were not bad people. They loved all their children and grandchildren – just not equally.

I am back in the present day. I am tired and tetchy. I have to juggle a demanding job, a neurotic ex-husband, two daughter at universities and my mother. I don’t want to look at photographs but it is the only thing that makes my mother happy nowadays.

My mother, her memories faded by time, looks at the photograph and smiles.

‘That was such a happy day.’ she says as she touches the faded photograph with her forefinger and turns the page of the album.

‘Was it?’ I say, doing my very best to keep my voice even. ‘Don’t you remember what happened after that photograph was taken?’

She shakes her head and I am in a quandary. Dementia has robbed her of her memories and although I want to shake her and share my memories, I can’t and I won’t, but I remember it all so clearly.

Caroline presided over our group because she did that in everything, but as today was her birthday she had even more special powers. She had been given a book on palm reading – when I say given – I mean demanded from her grandparents. She had decided, after reading a few pages and looked at some pictures, that she was now an expert and would read all our palms.

She started with Andrew; technically the eldest but we all knew that he was different. He was quiet, fascinated by insects and animals, and today we would probably say he was at the lower end of the autistic spectrum, but in those days he was just different.

He very reluctantly held out his grubby hand. Caroline looked at it with disgust and made some pretence at tracing the lines without actually touching them.

‘Hmmm, your lifeline isn’t very long. Can’t see you living past your mid-thirties. No children and a failed marriage. You really haven’t got much to look forward to have you?’ Caroline smirked and motioned Andrew to move away from her.

I was the next oldest.

‘No thanks.’ I managed a brief smile and backed away.

‘Coward! The twins next then.’ She beckons Sally and Tom over, knowing that at eight years old they are still under her power. She fails to find anything interesting in either of their hands and waves them away to join Andrew on the outskirts of the group.

She deals with my four year old cousin Alice in a very imperious fashion, knowing that her mother and Alice’s mother aren’t on speaking terms at the moment either.

Apart from myself, that leaves one child – my beloved baby brother Gerald. He is three years old and a beautiful but frail child. He has spent much of his short life in hospital and we are devoted to each other. Unfortunately he has yet to realise that the golden-haired, pink-clad Caroline is to be avoided. He breaks free of my grasp and runs to her when she offers him a sweet.

Grabbing his hand, she looks up at me triumphantly.

‘Gerry’s lifeline is very short Trisha. No marriage and no children but then he was never expected to last very long was he?’

I pull Gerry out of her grasp and with him under my arm, I carry him back to the house. My mother can see something is amiss and takes me aside. When I tell her what Caroline has said, she calls my father over and he starts gathering up our belongings.

‘Leaving so soon?’ Suzy purrs. The other children – and Caroline – have come in from the garden and Caroline has lost no time in telling her mother HER version of the incident.

‘It’s just a bit of harmless fun darlings. Caroline didn’t mean to upset Trisha, but you have to accept, she does get upset SO easily.’

Nevertheless, we leave, followed speedily by the rest of the family visitors. The birthday tea untouched, the birthday candles on the cake have not even been lit. Yet again, Caroline and Suzy have split the family.

My darling brother Gerry died a month later, and whilst we knew that Caroline was not the cause, I still blamed her for his death, and went on blaming her whenever anything went wrong in our lives.

My cousin Andrew got married just before his thirtieth birthday. We all thought there was a chance of success because she worked with adults with learning difficulties and seemed to understand him. She certainly understood the benefits system. Andrew became very depressed when his bride of a year left him. A neighbour found him unconscious after overdosing on the pills that were supposed to help. He never regained consciousness. Thanks Caroline.

My grandparents were so wrapped up with Suzy and Caroline that they barely noticed our absence. As they grew older and more frail, Suzy put them in a care home. She had very cannily arranged power of attorney for both of them, and had them change their wills so that she was the sole beneficiary. We didn’t even know where they were until they died – within a few days of each other. The solicitor contacted us to tell us the outcome of their wills.

It was just a formality.

It didn’t take Suzy long to run through the money, and then the house had to be sold. Caroline was in private education and the bills for her dance classes, elocution and etiquette sessions had to be paid.

Caroline lost weight; she became willowy and glamorous courtesy of costly nips, tucks, breast augmentation and a nose job. She treated her mother with contempt, especially after their inheritance was no more. Suzy aged badly after this, sold up the smaller house that she and Caroline had moved to, bought a small retirement flat for herself and rented an apartment for Caroline up in London.

‘Caroline has so many good friends in London and she needs to finish her courses if she wants to settle there.’

Suzy died penniless last year and we clubbed together for her funeral; her remaining sisters and brothers, nephews and nieces – even those who still live in New Zealand.

My mother sits in the armchair in my front room. She spends much of her time there in a rosy cloud of nostalgia, looking at pictures of the old days.

The days before Caroline got involved in sticking cocaine up her nose.

The days before she got involved in drug smuggling for her ‘good friends’ to pay for her nasty habits.

The days before she was found dead in her rented apartment. The police broke in after the landlord advised that she hadn’t been paying the rent and there were a lot of flies around. No sign of those good friends now.

It is time for another funeral. We have had to club together again. Caroline wanted a pink hearse with horses but we can only afford the basic package. I’m hoping that my mother will have forgotten about the pink hearse and the death of her only son when she cries at my cousin’s funeral. 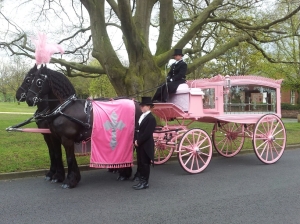