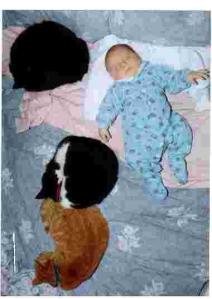 I can remember every moment of your birth-day – and that of your younger brother who was considerably bigger than you but slipped out with an ease and speed that caught the midwife on the hop. More of him another time.

Before you were born I had two miscarriages. I wasn’t sure if I could carry a pregnancy to full term; if I would ever know what it felt like to hold my child in my arms, to watch him or her grow into an independent person.

So when we got to the thirteen-week scan and could see your little heart beating, your Dad and I (and your Grandma) finally dared to hope that our dreams might come true. They didn’t do scan pictures in those days but your Dad had come prepared and was allowed to take photos of the screen.

We christened you Parsley. After Parsley the Lion, a character in one of our favourite children’s programmes – The Herbs. It wasn’t until the twenty-week scan that we found out that you were a boy and you became Robin. Robin Goodfellow. Robin the Hooded Man. His friends are more than fond of Robin. All our hopes and joys were invested in you.

This pregnancy was different.  All the symptoms that had been missing in the previous two pregnancies were there; the nausea, going off certain foods, craving other foods – especially cod in cheese sauce and crunchy cornflakes with strawberries.

We went to National Childbirth Trust antenatal classes. All first-time parents, all nervous and full of questions – except for the immaculate health visitor with the designer bump and gorgeous husband who was planning a water birth at home. She knew it all – and she made sure that we knew that she knew it all.

Fast forward to the day before your birth-day. Things felt different. I started fussing and nest building. The labour bag was packed and unpacked a dozen times and when my waters broke – luckily after we had been shopping at Sainsburys and put it all away – we phoned the hospital and were told to come on in.

You were in no rush though. Your Dad and I spent most of the following morning trudging round endless hospital corridors in an effort to get labour started. It was more diverting than lying on a hospital bed and feeling uncomfortable. The words of our antenatal teacher rang in my ears. ‘Keep upright as much as you can and let gravity do the work for you.’

The nurses on the ward would have preferred me flat on my back and well-behaved because they kept losing me.

Our consultant – who bore a striking resemblance to Maggie Smith – turned up at half-past two in the afternoon and although she smiled, we could see that she was slightly disappointed that you weren’t likely to make an appearance before she clocked off for the day.

We went into the labour ward around six o’clock that night. You were on the way. I tried to remember all the things our teacher taught us. Then I got told off. I was doing the empowering grunting thing. ‘Don’t waste your energy screaming – grunt and push.’

The midwife told me I was frightening the other mummies with my Neanderthal noises. I ignored her and carried on. Gas and air made me bold. Your Dad grinned and got the odd whiff of gas and air.

You gave us a bit of a fright when you finally emerged at half-past seven (in time for Coronation Street according to Grandma). Your APGAR score was low because you had managed to wrap the umbilical cord around your neck – not once, nor twice but three times. Liberated and unwound, you pinked up nicely and let out a yell. The midwife let go of the end of the cord and – according to your Dad because I was out of it by then- it flick-flacked around and sprayed the ceiling. Tennessee Chainsaw Massacre apparently.

Your Dad had you to himself for the first hour of your life. The midwives weren’t happy that all the placenta had come away so I had to go to theatre and have a ‘scrape’ under general anaesthetic. By the time I came around  I was back on the ward with you and your very proud Dad.

I never drink full fat milk and I’m not enamoured of egg sandwiches but these were offered to me and nothing ever tasted so good.
Your Dad went home to bed and I tried to sleep. You were in a cot beside me and I kept one hand on your head all night to make sure you were real and no one could take you away.

We had to stay in hospital for three days; I had stitches and you were jaundiced. It was torture because we lived so close to the hospital that I could see our house. Every night your Dad stood out in the garden and shone a torch so I could see he was thinking of us. I knew that.

We escaped on the fourth day and I can remember lying on our bed at home, feeding you and devouring Kentucky Fried Chicken. We were told to get you out in the sunshine to get rid of your jaundice.

You got sunburn – the yellow turned to pink and your ~Dad went out to buy a sunshade.

We didn’t do too bad for new parents; we only forgot you once. I’d strapped you into your car seat and left you at the top of the stairs for your Dad to bring down and put in the car. It wasn’t until he started the car that I realised something was missing. You slept through the whole thing so I don’t think you were mentally scarred.

Our theme song was ‘Kooks’ by David Bowie. You came to live in a lovers’ story. We hope you haven’t been sorry.

The antenatal class met up again six weeks after you were born. We shared our birth stories and showed off our babies. We tried not to look smug when the golden couple turned up with their screaming baby (and not very pretty). The water birth at home had to be abandoned and she was rushed into hospital for an emergency C-section. All that expense! Unlike her baby, the mother was very quiet during our catch up session. She looked rather unkempt and her husband’s tee-shirt had sick marks on the shoulder – just like the rest of us now.

So the birthdays came and the birthdays went. You were a left-hander and you skipped to school because you loved it so much. A prodigious reader;I had to buy two copies of each Harry Potter book when they came out because you didn’t want to wait till I had finished it. I always finished first but you said this was because I didn’t have to go to school and lose valuable reading time.

Senior school followed primary school, and we were told that you were officially a National Gifted and Talented Youth.  You made your own path – avoiding games and PE as much as possible  – but you were a very strong swimmer which made up for it. When everyone else was wearing an extremely short school tie, yours was a more respectable  – and acceptable – level because you didn’t care about such things.

You had your group of friends and parents’ evenings were embarrassingly wonderful for all of us. Dad helped you with your German and I dredged the depths of my mind for my GCE French. The maths and sciences were beyond me.

You aced your GCSEs and went onto college to do your ‘A’ levels. I panicked when we didn’t get a call from you after you got your results. I had visions of you throwing yourself into a canal in despair because you hadn’t got A stars.

I shouldn’t have worried. You sauntered in and showed me your results. All A stars. What was the fuss about Mum?

University was a foregone conclusion. So was your first-class honours degree in Chemistry and now you are studying for a PhD with a long title that I can never remember. Something to do with amino acids.

You are a teacher. A mentor. A scientist. You also mix a mean cocktail and know how to have a good time. Your knowledge of politics astounds me and I value your advice (and your cocktails). You are a bit more of a dedicated follower of fashion since the school tie days.

We don’t see that much of you because you are a hundred miles away and have your own life to lead but you know that you have surpassed our expectations and that we are very, very proud of you.

Robin Goodfellow. Robin the Hoodied Man. His friends are still more than fond of Robin.