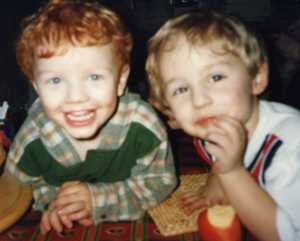 When my parents split up, there were just over six weeks before the end of the summer term. During that time I was catching two buses to get from one side of the town to the other. This came to an end when I got run over by a green station wagon at a busy crossroads in the middle of the main shopping area. It wasn’t a terrible accident. The car was slowing down at traffic lights, I sustained a grazed knee, cut my ankle and found myself sitting in a daze on a traffic warden’s gabardine mac, holding up traffic while an ambulance was called. I can still remember the smell of the coat and the confusion of crossing the road one moment and being flung up and out into the middle of the crossroads.  I would probably have been patched up at A&E and sent over to my mother – who was working on the hospital switchboard – but the kindly traffic warden insisted on picking me up and putting me in the ambulance. He bumped my head on the roof and concussion was added to my hitherto minor injuries.

It was enough to make my mother move me to a junior school closer to my Auntie Dee’s  and although I had the sporadic protection of my three male cousins, it was hard trying to make friends, especially as the accident had left me so frightened of crossing roads that I didn’t play out much. The other problem I encountered was that my fellow pupils had trouble getting to grips with my name: Cheryl, Shirley, Cherie were just a few of the variations. In desperation I announced that my name was Fred, and it stuck, much to my mother’s horror.

‘Why Fred?’ She said. ‘Any name would have done, but Fred!’ I shrugged, thinking that people would forget it by the time I moved up to secondary school in September. They didn’t. It stuck. It probably endured because in an all-girl school, our little clique consisted of Lee, Jo, George and me, Fred. Even the teachers – the more civilised teachers – called me Fred. The sub-human teachers – especially the hag who pretended to teach geography – treated me with the disdain reserved for anyone out of the ordinary.

Fred was not the good little girl I had been at junior school. Fred was an embryo rebel who lived in a bedsit with her mother and who had waved goodbye to a normal family life. She drank barley wine and hung around the student union bar on Friday nights when most of her peers were at youth clubs.

Within our group, it was George that was my best friend. She lived in the ground floor of an elegant detached house split into two flats. Her dad – also called Fred – was an aging hippy married to a much younger woman. George and her two older brothers treated their bewildered stepmother with a rudeness that the poor woman had done nothing to deserve. Their own mother had done a flit many years before, so she wasn’t to blame for the splitting up of their ‘happy’ home.

From all accounts George’s mother had been at the centre of the London party scene when George’s father met and married her. She knew rock stars and actors and after reluctantly bearing three children, had returned to her roots leaving confusion in her wake. George and I were thirteen when we went to stay with her in London for a very long weekend. We were so excited.  ‘That London’ was a place of magic and mystery; a place you went to on heavily supervised school trips to see exhibitions at the V&A, or the much vaunted Tutankhamun exhibition. I went to that one, I queued for hours, I brought home a paper carrier with King Tut’s death mask on it and not much else. I was older and more cynical by that time.

Our trip to London started well. We were met at Waterloo station by George’s mum. She presented us with make-up boxes from Harrods and took us out to dinner at a chic Italian restaurant round the corner from the three-storey Chelsea mews that she was looking after for friends. Until that moment, spaghetti bolognaise was something that Crosse & Blackwell did and it came in a small or a large tin. I may have turned my uneducated nose up a bit at the authentic Italian version. Okay I did but so did George. Her mum plied us both with red wine and thought it amusing when we got a bit squiffy. She was not quite so amused when we both threw up later that night. We had to clear it up ourselves though. She was far too gone and shut herself into her bedroom to avoid  the heavings and the smell.

She took us to Biba the next day and I spent 75 pence on a black scoop necked tee-shirt with yellow and black striped sleeves. The only Biba item I ever owned and I kept for years afterwards  even though it made me look like a bumble bee. That afternoon we went to the Odeon cinema in Leicester Square, saw ‘What’s Up Doc’ and gorged ourselves silly and hyper on unsuitable snacks. More upchucking ensued after a bumpy taxi ride home.

By Sunday we had spent nearly all of George’s mum’s limited funds and relations were rather frosty when we failed to show sufficient appreciation at being taken to the jousting at the Tower of London before being put on the train to come home. I was in disgrace because I had wanted to wear my favorite purple needlecord jean jacket. She said it was common  so I had to swelter in my shiny black PVC mac – with stick on cherries. Parting was not sweet sorrow. We were ungrateful brats and hell would freeze over before she ever invited her daughter – and her daughter’s equally obnoxious friend – to stay.

I think that our joint upchucking and hangovers after all the red wine had set the seal on our stay. George’s mother didn’t have a maternal bone in her body and we stopped being amusing when we started making a mess. We stood in the corridor of the train and sang King Crimson songs all the way home. Our fellow passengers weren’t exactly enthralled by two scrawny teenagers warbling ‘21st Century Schizoid Man’ and scowling at anyone who came out of the carriage to use the toilet.

Being only 40 minutes away by train, London was accessible to us, and became even more so as I moved into my mid-teens. I nearly had a very exciting meeting with a famous person. I was doing a project on Edward Gordon Craig – actor, director and scenic designer – as part of my ‘A’ level drama and theatre arts. I came across an advert in The Stage regarding research into the actress Ellen Terry – Craig’s mother. I wrote off to the box number and was delighted – not only to get a reply but an invitation to meet up at the V & A.  My mother had visions of me being kidnapped, raped or worse by some wicked theatrical type and so I wasn’t allowed to take up the invitation. Poor Nigel Hawthorne – I think I would have been safe with him somehow.

I became more blase about going up to London; shopping trips to Oxford Street, live music at the Hammersmith Odeon, the occasional matinee. It was a place to pass through en route to somewhere else when I was at college in Birmingham but never a place to actually live.

When our youngest was four we planned a mega trip to that London; he and his brother thought we were just going to visit Daddy’s airport and were gobsmacked when we climbed aboard a Luton-bound Easyjet. A train to central London, the underground and a sight-seeing trip on a double decker bus. The boys loved it – especially when we arrived at the Science Museum. We were going to take a trip on the Thames but time ran away from us.

I had always been quite chilled on my previous visits to the capital, but with two small and inquisitive boys in tow, my maternal instincts had me seeing perils round every corner. A fear of pickpockets and muggers outshone that wonderful Tube station scent that I knew so well. We survived it though and my baby boy announced that it was his best birthday ever.

Our most recent trip to that London was in the year of the Olympics. We were given free tickets to go on the London Eye and as we were spending a week down South to see family, we took the opportunity to travel up by train.  Our eldest son was away at Uni but being the intrepid train traveller that he is, he planned our journey and acquired the tickets for the trip.

I was less fearful on this trip. I like being on trains and so does my husband. My six foot baby boy was less enamoured – especially with the people who used their phones on the quiet carriages. The London Eye was wonderful and the boat trip that was part of the package enabled us to catch up on the experience we had missed out on years before. My baby boy liked London – but only if there weren’t any people in it. They spoiled.

That was my London. I’ve no desire to go back. Liverpool and Manchester are sufficient for me now.