We didn’t really do Halloween when I was a child.

I’ve never lived in an environment where small children dressed up for Halloween and walked round the neighbourhood after dark, blagging sweets and threatening retribution if the treats were not forthcoming.

I’ve seen it on the TV – usually in some film set in America though. Who can forget the sight of ET staggering along a street full of zombies, fairies and mini mock axe murderers?

When I worked in children’s homes, we did our best to discourage the children from going out on Halloween – we usually had enough trouble with the neighbours as it was and the sight of anyone emerging from the Home dressed up as a witch or skeleton would have brought forth a multitude of phone calls and the inevitable blue lights flashing outside.

Not In My Backyard.

So we looked at the situation in a more lateral manner and decided to have a Halloween party instead.  We invited social workers, our favourite policeman and a couple of parents who were actually grateful for the work we were doing with their children.

We worked with the children to decorate the building and make tantalising food.  My drama school training came in very useful as I painted faces and fashioned costumes out of whatever could be found in the store cupboards or begged from staff who weren’t that  fussed about attending but didn’t mind contributing.

It became an annual event and only ever attracted adverse attention once from a particularly right-on newly-qualified social worker who felt that we were encouraging  the children to participate in pagan celebrations. For a while we thought that we were going to have to abandon the party but assistance came from a very high place.

It appeared that the assistant director of children’s services had intervened and basically told the social worker to wind her neck in.  We weren’t sacrificing the children, nor encouraging them to go out and persecute the neighbours – in fact we were keeping them occupied and – dare I say it – happy!  The AD even contributed a tenner to the party fund. They don’t make assistant directors like that anymore.

Unfortunately the management team changed after that and the local authority decided to shut down  several of the homes. In the reshuffle I moved to a larger observation and assessment centre where children were only supposed to stay for a period of six weeks at the most while we observed and assessed them. In reality many of them were stranded there for several months before anything practical was done about their futures.

It was a much larger establishment and had a huge dining room  – ideal for parties! I moved there in the spring and by autumn, had managed to convince the other staff – and more importantly the children – that we should have a Halloween party – with a disco!  Well, when I say disco I mean a record player someone donated to us, and my ever-growing collection of singles – which I still have. There were obvious gaps as I changed records and this was long before the days of  scratching and mixing but the children seemed to like it. 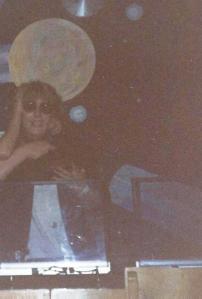 This photo and the following two photos were taken at one of our Halloween discos. There are better photos but I have no idea where the children in them are now so I can’t get their permission  to use them here. I’ve chopped off the naughty boy who was trying to remove my headphones, and the other two children fell victim to my facepainting skills so that even their own mothers wouldn’t have recognised them. 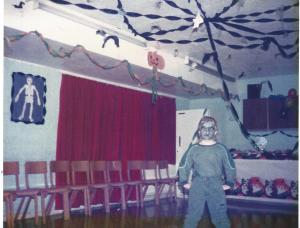 You can at least see the lengths we went to with black and orange crepe paper, inflatable skeletons and false spider webs. We played games too; apple dunking, eating a donut off a piece of elastic and that good old standby – can you eat three cream crackers in three minutes?

Nearly as hard as eating a sugary donut without licking your lips.

The cook even allowed us into the kitchen for the evening and as well as the usual buffet favourites, we served up chips in newspaper squares, and sent the kids into a fizzy frenzy with elaborately decorated mocktails of cheap lemonade and fruit juice (they’d have preferred Coke or Pepsi but the budget didn’t run to that). It’s amazing what gory things you can do however, with glace cherries, cocktail sticks, marshmallows and cochineal.

Life in a children’s home – however big or small – isn’t the way it’s portrayed on the TV.  There’s a lot more arguing and fighting – and that’s just the staff.

I learned a great deal about life in the ten years I spent in children’s services. I also acquired a social work degree and a level of cynicism about social care that has increased over the years.  You do your best but it is often a thankless job due to a lack of resources, unimaginative management and children that have been desperately damaged by their families before they even get to you.

I got out of childcare. I got out of social care entirely for a number of years I spent enjoying life with Hub and subsequently Uni Boy, Gap Boy and a large number of cats.

I forgot about Halloween.

And we moved Up North.

One night, in the middle of September, I answered the door to a pair of hoody-clad yoofs wearing fright masks.

“Trick or treat.” Their voices alternately squeaked and rumbled which gave me a clue to their approximate ages.

“It’s not even October yet.” Quite bravely considering it was nine o’clock at night and I was alone in the house with two small children.(and five cats who were lined up behind me being curious).

“Yeah, well we’ll be in Tenerife over Halloween. It’s half-term.”

“I have a couple of bars of chocolate in the fridge but they’ll probably melt in Tenerife.”

They looked at me, then at each other and pulled faces that implied that I might be lacking in the brain cell department.

I drew myself up to my full five feet two inches and tried to forget the fact that I was wearing huge padded comedy slippers purporting to be the Queen and Prince Phillip.

“Right, so you are attempting to extort money from me by use of menace then?”

“What?!’ They both took a step back from my door.

“Oh yes.” I was warming to my subject now. “It is nine o’clock at night and I have two males dressed in dark clothing, wearing masks to cover their identities and demanding money from me. I’ll phone the police now then.”

They legged it up the road before I could count to five.

I shut the door  and managed to navigate my comedy slippers through the cat barricade and collapsed with trembling knees on the sofa. The cats followed me into the front room and I could have sworn they were laughing – or maybe just smirking. My cats had seen through my bravado – you can’t fool cats.

My own little cherubs didn’t fancy venturing into the cold Northern nights and neither did many other children from our area. The Coffee Morning Group Mums (alter known as OptiMums)  including my Lovely Friend, took action. We decided to have – yes – you guessed – Halloween discos!

These were the best though; we made costumes and painted faces, decked the halls with crepe paper and cooked up a storm with such delights as Dead Man’s Fingers (cocktail sausages), Slime Soup (LF’s wonderful pea and ham soup), the entire range of additive filled Halloween sweets and those wonderful orange and raspberry drinks in plastic cups that you inserted a straw into. They were cheap and cheerful and invariable made the kids hyper – but they were our kids so nobody minded!

It’s twenty-past seven now and there have been no Halloween knocks at our door.  Our neighbourhood now consists of elderly people or families like ours – whose children are no longer children and  too old for such frivolities.

The only small children in the road have gone away for half-term and thank goodness, so has the naughty boy who used to live across the road and chuck eggs at the windows regardless of whether you tried to bribe him with chocolate  – or money.

Bezzie Mate has just told me that in his part of the world, the streets are busy with large women clad in black with cats ears shepherding large groups of suitably garbed children from door to door. They are also having fireworks there as well.

I’m not sure but probably word has got around that there is a large black dog on the other side of our front door and he doesn’t like VISITORS! Or fireworks.

To compensate for no-longer children and lack of trick or treaters, Hub and took a parcel of Halloween goodies with us when we went to visit Dear Friend and her lovely family. They sampled Vampire’s Veins, chocolate eyeballs, green slime cakes and marshmallow skulls.  I wish we’d had such a variety of naughtiness to offer my  broken-homed children, or even my own two monsters.

Here they are; Uni Boy as a pumpkin and Gap Boy (rather appropriately) as a little devil. I have been told recently that I abused my boys by dressing them in such bright colours – Gap Boy can be really ridiculous sometimes – they looked so cute in those days – sigh.

Oh, the cushion! I nearly forgot! have to confess that I cannot watch horror films without having a cushion in front of my face for the really scary bits. I can remember watching ‘Halloween’ with a group of older teenaged girls one night .

Giggles.  In this age of technology I prefer to ‘watch’  horror films on DVD so that I can fast forward them when a scary bit rears its ugly head – only works well  if you know the film already.

No blogs during November unless something really exciting happens – I will be busy doing NaNoWriMo and none of that goes to Blogland after the disastrous events of 2012 which resulted in all sorts of people getting offended and my having to become self-employed.

Happy Halloween – however you choose to celebrate it.